How to Prepare for Employment-Based Adjustment Interviews

In August 2017, USCIS announced that effective Oct. 1st USCIS would begin to phase-in interviews for adjustment of status applications (Form I-485s) based on employment. This is one of the dramatic changes in the employment-based ("EB") cases because previously only 5- 10 % of the EB adjustment applications were called on for interviews and majority of the EB cases were adjudicated on paperwork filed with USCIS. From October 2017, all employment-based adjustment of status casesmwhere the underlying petition is a Form I-140 (EB-1, EB-2, and EB-3) that are filed on or after March 6, 2017, are subject to an interview.

applications and may give the EB applicants a stomach flip. However, if you are well prepared and practice potential Q &A's before the interview, based on truthful information, applicants would feel confident and not be surprised at the interview. 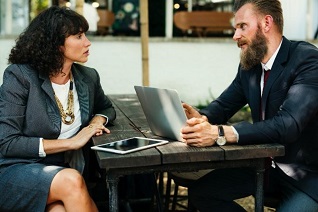 Where everything goes well at the interview, the applicant may get the positive results 1-3 weeks after that.

Since the interview notice is normally mailed about 30 days before the actual interview date, most of applicants without serious issues will have sufficient time to prepare for the interview.

While the interview questions may be varied, depending upon the issues of each individual case, the following points could be applicable to most of employment-based interviews. In preparation of the interview, applicants must be familiar with the difference between the previous position or the position when s/he was initially hired by the petitioner, his/her current position, and the offered position. Often, they are the same, but, if different, the applicants should be able to answer the interviewing offer's questions correctly with respect to the each positions, corresponding job duties, current wage and the offered wage. To be clear, "offered" position/job title means the position the applicant will take upon adjustment of status (upon obtaining a green card) and the "offered" wage is the rate which has been indicated on the Labor Certification and the I-140, Immigrant Petition. Upon adjustment of status, the applicant must be paid at the offered wage rate or higher, even though s/he does not have to be paid at that level currently. At the time of interview, the officer often requests the applicant to submit a recently dated Confirmation of Permanent Job Offer from the petitioner, certifying maintenance of the permanent job offer, offered position, offered wage, offered job duties, and other employment terms and conditions. The most recent Form W-2 and/or copies of recent pay stubs could be

accompanied with the updated job offer letter, if the applicant has been working for the

Secondly, the interviewing officer verifies information on the Form I-485 and G-325A,

Like other adjustment interviews, the interviewer wants to see original birth certificate, if

applicable, original marriage certificate and child's birth certificate. If copies were submitted, applicants should prepare original documents thereof and present them to the officer, when asked. Also, please make sure to bring original expired and current passports, EAD card(s) or combo (work authorization and travel permit) card(s) issued by USCIS with you.

If married, the applicant and spouse must gather and bring the bona-fide marriage documents in order to prove that they entered into the marriage in good-faith. Since the spouse is getting a green card based on the marriage to the principal applicant, the bona fide marriage relationship is likely to be questioned. Especially, when they got married while the principal applicant's immigration case was being processed and the newly married spouse was included in the green application, the officer will more focus on whether their marriage is bona-fide or a "sham marriage" in which the parties of a marriage entered into the marriage solely for the purpose of falsely acquiring immigration benefits. The couple should be able to consistently answer the questions about their relationship, such as when and how they met, how long and how they dated, who/when/how proposed to a marriage, their special occasions, the information on each other's close family. Even if the two people are married in good faith, they might forget about specifics or might tell the different stories, times, reasons when they are asked unexpected personal questions at the tense interview situations. In fact, there was a case where an applicant gave a wrong answer to a simple question like his address because he was extremely nervous at the interview.

Preparation will allow the applicants to be more relaxed and feel confident at the actual interview. To prepare for this aspect of the interview, the principal and spouse may go over their history of dating, marriage, family occasions before the interview, and bring joint documents which a married couple normally possesses together, for example, joint bank statements, joint lease or deed for the residential address they live together, pictures with each other, family and friends with short explanations, joint utilities bills, if applicable, joint car, health insurance, joint memberships, etc.

In addition, the officer may inquire about non-immigrant history since the first entry to the United States, dates and places of the entries, how s/he has changed their status or whether to have applied for visas at the U.S. consulate offices overseas. If you have attended school in the U.S., the school records could be asked to verify whether the applicant has actually attended the school or has not engaged in unauthorized employment while enrolling with the school.