Be Aware of Your Rights at "Interior Checkpoints"

Posted on July 30th, 2018 Robert R. GardA widely circulated video in late January showed two Border Patrol Agents boarding a Greyhound bus (en route from Orlando to Miami) on January 19th at a station in Fort Lauderdale. The agents questioned the passengers about their immigration status and asked for documentary proof of U.S. citizenship before arresting and removing one woman from the bus, whom agents determined was an "overstayed" visitor from Jamaica. On February 1st, another video shared widely on the internet showed two Border Patrol Agents boarding an Amtrak train at a station in Syracuse, New York, selectively asking passengers who appeared to be foreign born for documentation of their immigration status and citizenship. While these Border Patrol "check point" encounters occur quite frequently, most are not recorded on videos and posted on the internet. 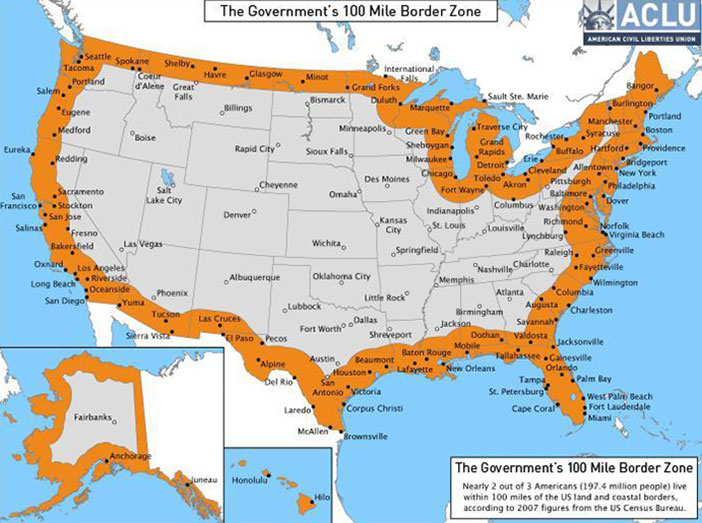 Most people have at least a rudimentary understanding of the protections afforded to persons (of any immigration status) in the United States to be free from random and arbitrary stops, searches and seizures, while few possess an intimate knowledge of the most current judicial interpretations of those rights.

Similarly, few are aware that these 4th Amendment principals don't fully apply within what has been established as a "100 mile border zone", which was adopted by regulation by the U.S. Department of Justice in 1953, without any public comment or debate, and the Border Patrol regularly disregards the 100 mile limitations, and have been supported by a largely compliant judiciary. The Immigration and Nationality Act (INA) allows the Border Patrol to board and search any railway car, aircraft, conveyance, or vehicle within the 100 mile border zone, and the border zone itself includes not just land borders, but also borders delineated by oceans, lakes and other bodies of water. Roughly two thirds of the population of this country reside within this 100 mile border zone, which encompasses the entire States of Connecticut, Delaware, Florida, Hawaii, Maine, Massachusetts, New Hampshire, New Jersey, New York, Rhode Island, and Vermont; and also includes almost all of the 10 largest U.S. cities and metropolitan areas (New York, Los Angeles, Chicago, Houston, Philadelphia, Phoenix, San Antonio, San Diego and San Jose.)

What should one do if you encounter one of the roughly 150 - 200 mobile "interior checkpoints"? There's no obligation in the Constitution for U.S. citizens to carry identification documents or proof of U.S. citizenship, but Lawful Permanent Residents are required by law to carry their "green cards." Also, the 5th Amendment right to remain silent and not answer any questions is available to U.S. citizens, as well as both documented and undocumented immigrants. As a practical matter, an individual "refusing to engage" a Border Patrol Agent will likely find that the Agent will not simply move on to the next person. On the other hand, if everyone on a bus, plane or train sees the Agents approaching and quickly agree to studiously ignore the Agent's questioning, those Agents may not want to push their rights to make a "brief and limited inquiry" any further. Additionally, the 5th Amendment's "equal protection" clause does not allow Border Patrol Agents to engage in racial profiling or single people out on the basis of impermissible characteristics like race. If a video of the encounter can be safely made, that might help as well in challenging the legality of the inspection in Court.

If you have been stopped at an interior checkpoint and you have questions about what will happen next, please reach out to Immigration Attorneys, LLP to schedule an appointment with one of our attorneys.